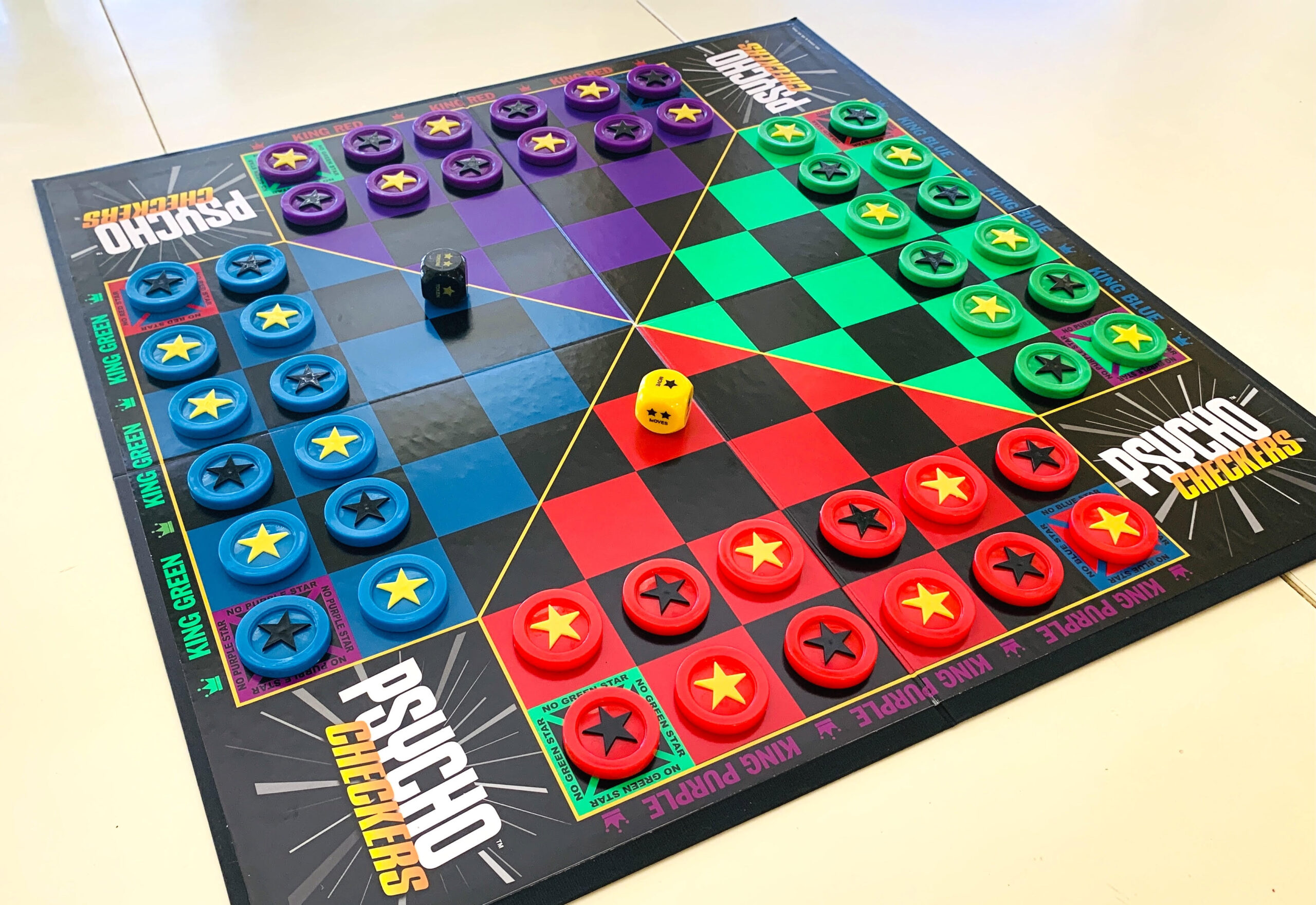 Checkers (or draughts, as it’s known in Europe) is one of the oldest and most universally played board games worldwide. Although there is some speculation over its origins, some believe that one of the earliest forms of the game was found in present-day Iraq by archeologists, dating back to 3000 BC. Other experts think it might have been invented in France or Spain. Regardless of where or when the game got its start, checkers has gone through many transformations over centuries, with official rules for the game created in the 1700s. There’s even a World Championship Checkers tournament, played since the 1840s.

More recently, Jimmy Q Games turned checkers on its head, devising a multi-player strategy game for both kids and adults. Instead of using traditional rules – with the black or red pieces sticking to their respective sides of the board – Psycho Checkers allows gameplay across the entire board for all players. 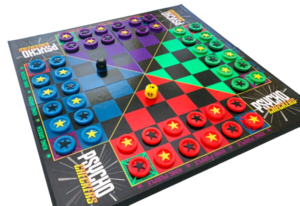 Checkers for the entire party

The game can also scale depending on your party size, allowing for a two-to-four-person game or up to eight players instead of the usual two-person maximum faceoff in traditional checkers. It also allows each player two armies of tokens (twelve total) – this addition gives the game “controlled chaos,” according to its inventor.

Psycho Checkers’ gameplay is extra fun and colorful. Red, blue, green, and purple tokens (six with yellow icons, six with black icons) move across a color-coded board with yellow and black dice thrown into the mix. Each token is limited in movement depending on whether it has a black or yellow icon during regular gameplay. Once a piece is “Kinged,” a world of possibilities opens up!

Another differentiator is the use of dice. Jimmy Q Games introduced a pair of dice to randomize gameplay/level the playing field (for younger enthusiasts) and add a little bit of luck to the multi-player strategy game. While traditional checkers requires mostly strategy with some luck to win, Psycho Checkers is the opposite. The game takes some skill but leaves many moves up to chance. Roll the black die to determine how many tokens you can move and the yellow die to see how many moves you’re allowed during each turn.

How to master Psycho Checkers

So how can a player master Psycho Checkers? Jumping is the key to winning! In this non-traditional game, a player must jump their own tokens to cross the board or extend a turn. Traditionally, each player’s goal is to convert as many pieces to “Kings” as possible. There’s a similar rule in Jimmy Q’s game, which is where the fun truly begins! Once a player says, “King me,” their King can attack both yellow and black tokens, so no one is safe!

Jimmy Q Games’ modernizes a traditional (ancient?) board game by making it more challenging and exciting! Once you grasp the possibilities of gameplay, it really is a blast!

sacrifice your first line of pieces to break through your opponent’s blockage. Then, set up your strategy with your next step of tokens! Good luck!

Psycho Checkers is recommended for up to 8 players, ages 8 to adult – everyone can join in on the fun! Click here to order.